Don’t Get Stung By A Hornet!

Know the signs of hornets and how to prevent a sting while you’re enjoying your time outdoors this summer. 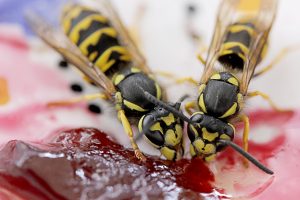 If you are stung by any kind stinging insect this summer it may induce panic as you fear for an allergic reaction. You may also panic because you suffer from uncomfortable symptoms such as stinging, itching, and burning. However, there’s little to fear. While hornet stings are painful, they don’t typically last long or cause long-lasting problems.

If stinging pests are becoming a problem near your home or business, contact a bee removal specialist.

Types of Wasps and Hornets

Despite often being used interchangeably, wasps and hornets are not the same species.

Although hornets are a subset of wasps. There are several varieties of these stinging pests including:

Bald-faced hornets are some of the most common, as well as the most territorial. These hornets have profound white marks on its face and body and will sting repeatedly if you come near its nest. It is most common in the southeastern United States but can be found as far north as Alaska and Canada. There are many other hornet facts that make them distinct.

Hornets are part of the insect family Vespidae, which contains all hornets as well as several types of wasps.

Hornets tend to be larger than wasps, and are usually an orange-red color, while wasps are usually yellow and black.

Another species that is frequently mistaken for a wasp is the Carpenter Bee, which tends to create nests in gutters across the country.

Where Are Hornets Usually Found?

Hornets, like most stinging insects, prefer to build their nests in high places.

Common places you may find a hornet’s nest include:

They do occasionally build nests in the ground as well, such as in abandoned rodent burrows.

While nests in any location can pose a problem, the ones in the ground are perhaps most dangerous, as they are most likely to be accidentally stepped on.

They aren’t typically aggressive, but a hornet will sting when threatened.

How Do I Treat a Hornet Sting?

A hornet sting can be deadly to people who are allergic.

Hornet venom isn’t generally toxic, but these pests can release more venom per sting than any other insect.

Therefore, children and those with preexisting conditions can be particularly at risk when it comes to being stung.

If you are stung there are a number of steps you should follow:

How Do I Get Rid of Hornets Around My Home?

If you recently detected a hornet nest around your home, don’t panic. Hornets typically choose to nest in inconspicuous places, such as under the leaves, in attics, and around your deck. While a hornet nest is no cause for alarm, you should move quickly to get rid of it. Consult the professionals in doing so.

Hornets are nature’s pest controllers, and can help get rid of unwanted garden pests such as aphids and other insect larvae.

Therefore, you should always contact experts who will determine whether the nest poses an actual threat to you or not before removing it. Don’t risk a sting (or multiple stings) by trying to get rid of the nest yourself.

Instead, contact a licensed pest control professional to get rid of it for you. At Rest Easy Pest Control, our technicians are trained in safest, most effective, and most environmentally-friendly ways of getting rid of these pests.

We will work with you to develop a solution that meets your budgetary and safety goals while getting rid of the dangerous nest at the same time. Contact us today for a free quote, and make the most of your summers outside in hornet-free peace.