The problem of bed bugs in NYC is not just relegated to the bed anymore. The train cars in our very own subway system have been fumigated due to the bed bug infestation.

MTA officials have discovered bed bugs in certain cars on the 5 and N lines in New York City. The cars were recently put out of commission so they could be cleaned. There have also been reports of bed bugs on the 7 line as well, but after an inspection, MTA officials have found no evidence.

There have been official reports of bed bugs in the homes of more than a couple of MTA workers. This suggests that people may be accidentally picking up bed bugs on the subway, and then bringing them into their homes. Since 5.5 million people ride the subway system every single day there are ample opportunities for these pests to spread.

Bed bugs are parasites that can’t live without human or another mammals’s blood. So, if you do see a bed bug on a subway car, it almost certainly fell off of another person. It’s also very likely that the bed bugs you find on a subway car are pregnant females. They are trying to hitch a ride on a person into a new home where they can start their own colony elsewhere. 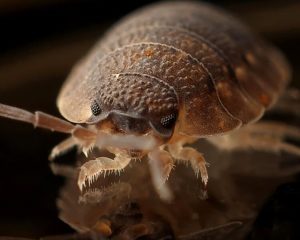 Close-Up of a Bed Bug

Should You Continue Riding The Subway?

Obviously, for more than 5 million people NOT riding the subway is not an option. New Yorkers depend on the NYC subway system everyday. However, the reality is that there is little reason to panic. These instances have happened before. Back in 2010, a booth in a subway station in Brooklyn had to be fumigated due to bed bugs. And since then reports of bed bugs are down by as much as 50% across al of New York City.

Furthermore, since bed bugs need people to survive, they won’t infest the subway cars. If a person already has bed bugs at home then that person will end up bringing them onto the subway. Once in the subway, from there they fall off and hop onto someone else.

Also, it’s just a tiny percentage of the people who ride the subway. As long as MTA workers continue to respond diligently to reports, perform regular investigations, and fumigate the cars with bed bugs, there is no need to fear riding the subway because of bed bugs.

If NYC bed bugs have made their way into your home though, don’t wait to call a professional bed bug exterminator at Rest Easy Pest Control. We’ll quickly take care of the problem so you can rest easy.***