Are Their Stings Dangerous to Humans?

Don’t worry—it’s not a spider. However, the tarantula hawk has a reputation of its own that rivals the “creepiness” factor of any arachnid. This critter is ranked as providing one of the most painful stings to humans. 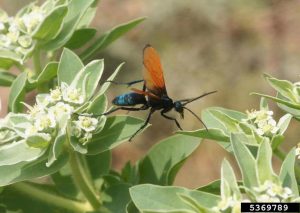 While these bugs don’t like to sting humans—they are parasitic to tarantulas, not people—it can be quite painful to come into contact with them.

What Are Tarantula Hawk Wasps?

Despite the confusing name, they are not spiders but are actually wasps. They are parasitoid wasps, meaning they use their sting to paralyze their prey and then use it as living food.

Most of their colors are blue and black. These wasps also have bright, rust-colored wings. Their bright coloration indicates their ability to deliver a powerful sting.

Where Do They Live?

Luckily, your likelihood of encountering a tarantula hawk is rare. These insects live in warm areas, such as India, Southeast Asia, Africa, Europe, and the southern United States.

These wasps are most active during the daytime summer months. However, they like to avoid high temperatures and will shrink back to their dens in times of intense heat.

“Tarantula Hawk Wasps have been observed as far north as Utah and as far south in South America,

with the broadest and largest range of species dwelling in South America.”

What Do They Do?

Tarantula hawks attack tarantulas with a painful sting, paralyzing them and dragging them into a den before laying inside them an egg. When the egg hatches, the larvae then feed on the paralyzed spider.

A Tarantula Hawk and its prey by Marc Shandro

Is Their Sting Dangerous to Humans?

In most cases, tarantula hawks won’t sting unless you bother them first. They’re similar to wasps in that they are incredibly bold, but it would take stepping on one or picking one up for you to receive a sting.

If you do get stung, you’ve had some bad luck, as the sting of the tarantula hawk wasp is rumored to be one of the most intense, painful stings of all insects. Because their stingers are so large, very few animals eat them, and as a result, they have few natural predators.

Luckily, the sting is not dangerous, unless you are unfortunate enough to develop an allergic reaction. The area where you are stung may remain red for up to a week, but the pain from most stings subsides within just a few minutes.

To treat the sting, make sure you wash the site with antibacterial soap and warm water. This will reduce the likelihood of an infection. You can apply a cold compress, ice, or topical cortisone or antihistamine to relieve the pain, itch, and swelling.

“The sting of tarantula hawk wasps are believed to be one of the most intense, painful stings of all insects.”

How to Get Rid of Tarantula Hawk Wasp Infestations?

It is rare for tarantula hawks to attack humans, but if you have a large population on your property, it’s a good idea to try to get rid of it to avoid any accidents.

Using insecticide dust near the nest on the ground can help remove these pests, as can spraying hanging nests. You can create traps without chemicals as well, which is especially helpful if you are worried about polluting your home. Traps can be constructed out of sweet sodas such as cola and dish soap, which will attract and then poison the wasps.

If you detect an infestation, it’s important that you deal with it expediently. The females can live up to forty years, and their populations can be incredibly tenacious.

If you’re having trouble getting rid of a tarantula hawk nest on your own, consider contacting a licensed Long Island exterminator to take care of this issue for you.