What Do the Dangerous Fire Ants Eat?

What Do the Dangerous Fire Ants Eat?

It is an important point to know what and how they find their food, so in case if you have an encounter with a mob of the big red ant, you can take the precautionary measures.

Pests and insects make the largest living group on this earth and belong to the class Arthropoda. They have eight or more legs joined to different parts of their body.

They feed on a variety of things. Few of the arthropods feed on plants, and few of them feeds on other insects while some are omnivorous in nature.

One of such omnivore members of the Arthropods is fire ants. They feed upon both, plants and animals. Carbohydrates, proteins, and lipids are the main nutritional elements they are looking for. 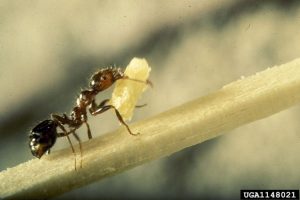 Originally from South America, ‘red imported fire ants’ have spread to other countries such as the U.S., New Zealand, Japan, China, and Korea. Fire ants are commonly found near container yards and storage places.

They are mostly known to like oily food. However, a new study reveals that fire ants infected by a particular virus have different foraging and food cravings. These fire ants prefer to feed on carbohydrates such as diluted honey and protein-rich food like tuna and peanut butter.  The finding is expected to improve the existing chemical control schemes to minimize the impact of fire ants.

How Do They Find Food?

It is an important point to know how they find their food, so in case if you have an encounter with a mob of the fire ant, you can take the precautionary measures.

Their method is to send out one single worker fire ant to locate the food. Once this single worker finds the food, it generates some sort of chemical mark or pheromone trail around the food.

Then it goes to the remaining family and let them know about the food. The mob then follows the instructions and chemical signals to access the food. So, try to clean your house as much as you can, to avoid the entry of any sort of insects into your home.

Fire ants are omnivorous in nature. They prefer several kinds of food, depending upon the environment they are living in. They feed upon plants, dead corpses of vertebrates and invertebrates which also includes some other species of ants.

An interesting fact is that the worker ants are not able to ingest solid particles larger than 2 microns. That’s why they are dependent on liquid food, and that sometimes contains plant and flower extracts.

Let’s have a close look at some of the common food items for the fire ants in broader categories.

They are not a good omen for the plants because the fire ants are responsible for damaging much of the agricultural crops. This includes sorghum, corn, soybean, etc., thus causing severe economic losses to farmers.

The thing is not over yet, they are also responsible for tunneling into the potato tubers and young plant stalks, and consumed the developing citrus fruits.

Plants are usually the source of carbohydrates for them. In worst case scenarios, they can even kill trees by girdling roots. They also take in different seeds as their food source which they collect while foraging.

This is one of the most challenging items to get for the fire ants because, in this category, they primarily feed on scorpions and spiders. The reason why they are challenging is that scorpions also use to feed on such creatures.

So, if somehow fire ants escape the attack of scorpions, they can cherish the food; otherwise will become food for scorpions. In the case of spiders, they use to feed on their eggs. 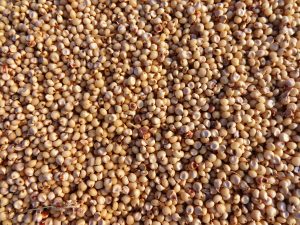 They are not a good omen for plants because fire ants are responsible for damaging agricultural crops.

They cause severe economic losses for farmers.

Next food item for the fire ants is the insects. The fire ants use to pray on several other insects and pests. This includes caterpillars, butterflies, earthworms, ticks, arthropod eggs, larvae of many insects and likewise.

They use to feed on the corpses of several vertebrates including mammals and reptiles. Their main reason for the attack on such carcasses is to gain as much protein as the can.

This eating away corpse is also beneficial in recycling the nutrients back to the soil. Fire ants are also known for eating away young vertebrate animals, for example, rodents, calves, and birds.

Like all other ant species, fire ants too are in love with the sweet and sugary substances. They fondly take in honeydew produced by aphids, sweet nectar of various plants and sweet secretions of scale insects, mealybugs, and whiteflies.***