How to Identify and Prevent Chigger Bites

When chiggers bite, they insert enzymes into the skin that destroy the host tissue, effectively hardening the surrounding skin. 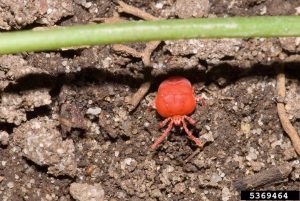 How Do Chiggers Bite People?

Chiggers get to you by crawling up pant cuffs, shirt sleeves, and collars in areas of tall vegetation. Some people believe that chiggers burrow under your skin, but this is not true.

Chiggers are most likely to bite in areas such as wrinkles, folds, and other thin-skinned spots. Bites commonly occur in areas where clothing is compressed tightly to the skin and aren’t always excluded to exposed areas of skin.

Chiggers won’t come inside your home but they can be on a blanket or jacket you later bring inside.

To avoid coming into contact with chiggers, wear pants tucked into boots as well as long-sleeved shirts. Don’t walk through tall grass or other unmowed areas, and wear insect repellent whenever possible.

If you think you might have walked through a chigger-infested area, take a shower as soon as you come inside and wash any potentially infested clothing.

How Can I Tell If I’ve Been Bitten?

Chigger bites are usually small red dots, around the size or smaller than a mosquito bite, but they are more intense in their duration and itching. When chiggers bite, they insert enzymes into the skin that destroy the host’s tissue, effectively hardening the surrounding skin.

You will usually notice signs of itching or blisters within one to three hours after you have bitten. These bites can persist for several days, with full lesion healing taking up to two weeks. 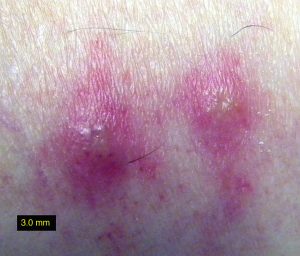 How Do I Treat Chigger Bites?

If you happen to be bitten, don’t panic. Chiggers aren’t known to carry any diseases and won’t cause any long-term suffering.

You can treat them in the same way you would treat mosquito bites, taking care not to scratch too much.

Because some people still erroneously believe that chiggers burrow into the skin, it is often believed that home remedies such as nail polish and rubbing alcohol applied to the skin will help drive the chiggers out of the skin.

However, this can worsen the itching as it will dry out the skin. Instead, take a cold bath or apply cold compresses to the itch.

Apply topical ointments such as colloidal oatmeal, calamine lotion, and corticosteroid creams. You can also take over-the-counter antihistamines, such as Benadryl.

If your symptoms become too unbearable, consider visiting your doctor to ensure that your reaction hasn’t become too severe.***

“Chiggers’ larvae are parasitic and feed voraciously, often not detected until the host begins to itch.”

Chiggers are essentially the juvenile form of a specific type of mite. Related to spiders and ticks, these nasty creatures create itchy welts on your skin. Chigger bites can be incredibly itchy, uncomfortable and even lead to raised blisters or rashes.

Where Do Chiggers Live?

Chiggers live in moist soil, usually in yards, parks, or marshes. When the larvae hatch, they eagerly await the arrival of a host species such as a mammal, reptile, or even a bird. Larvae are parasitic and feed voraciously, often not detected until the host begins to itch.

Young chiggers have six legs, while adults have eight. While adult chiggers won’t bite, their presence is cause for alarm, as their larvae will ultimately feed on you.