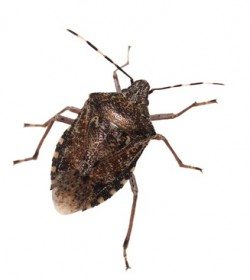 Officially known as the Brown Marmorated Stink Bug, the insect is a farm pest but tends to intrude into households for shelter and warmth during the cold winters. As the name suggests, stink bugs emanate a foul, pungent smell, very much similar to coriander.

The odor or stink is a defense mechanism that the insect depends upon to ward off predators and other dangerous situations. Whenever they sense danger, stink bugs secrete the foul-smelling and bad tasting substance aimed at keeping away predators and humans away.

While fruits and vegetable plants are the only casualties of these pests, the foul smell that they discharge in our homes can be quite distasteful and discomfiting.

Where Did Stink Bugs Originate?

An alien pest that is believed to have accidentally entered the US sometime in the 1990’s, stink bugs are natives of countries like China and Japan.  First noticed in Pennsylvania, stink bug populations have expanded to at least 17 states of the US now.

Measuring an average length of 1.6 centimeters and a width of much the same length, stink bugs are shield-shaped. Both, the top and underside surfaces of the bug are brown and bear vein-like markings in shades of blue, gray, off-white, black, and copper colors. Its notorious stink glands are strategically positioned under the chest, and above the stomach.

What Do Stink Bugs Eat?

Although some species of stink bugs feed on caterpillars and larvae of beetles, stink bugs primarily feed on plants, including the pods, seeds, blossoms, and buds. The bugs suck the sap from the plant materials resulting in misshapen buds and fruit. Naturally, farmers feel the maximum impact of stink bug infestation.

But since stink bugs subsist on plants and foliage, they can come visiting backyards and household gardens rich with flowering plants and fruit-bearing trees. But as we all know by now, the biggest problem they pose to us in our home is, you guessed it right – the stink!

Stink bugs start making their presence felt in residential areas in the fall.

With temperatures dipping constantly, stink bugs in groups first seek warmth from the sides of homes and buildings. Once assembled in sufficient numbers, they then try to enter the building via the air vents, cracks and crevices in the walls as well as through gaps under window and door frames. After gaining entry indoors, the stink bugs try to remain dormant until the winter passes.

However, they stir to life at the slightest sign of warmth and try to find their way back to the outdoors again. In such situations, if we try to hit out at them or catch them, their defense mechanisms start working and release the typical foul-smelling substance from their bodies. The stink may linger on for quite some time causing discomfort to us.

As we have seen, except for the nauseating odor they emit, stink bugs are pretty harmless.

Under the circumstances, pest prevention is better than cure, it seems. And so the best way to control stink bug infestations would be to prevent their entry into our homes. The first thing to be done is to prevent them from congregating on the outer walls of your home. This can be achieved by spraying a suitable pesticide on the outer walls of your house.

The next task involves locating all the potential entry points like cracks and crevices in the building’s walls, the gaps under doors and those between the walls and windows.

Finally, seal all these potential entry points with a high-quality silicone or a caulk of silicone and latex. While you are at it, don’t forget to replace or mend the damaged screens on windows and doors too.