Termites are six-legged insects with straight and pointing beady antennae.

Often, damage caused by termites is confused for a case of the carpenter or fire ant infestation, due to their similarities. While ants have bent antennae, the termites’ antennae are straight.

Termites consume mainly wood and other plants, which gives them the necessary cellulose for nutrition. They are very secretive, as a result, they seldom come out in the open.

The most visible sign of termite presence around the house is swarming. They swarm to attract mates and begin new colonies. 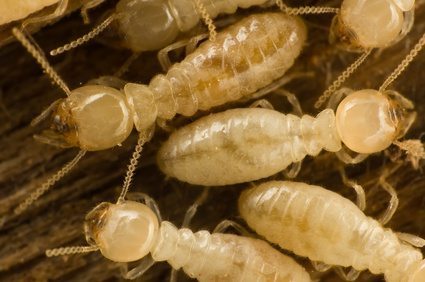 Termites are six-legged insects with straight and pointing beady antennae. They don’t have a distinct segmentation in their body. Instead, their body structure is somewhat ribbed.

Their heads are large in comparison to the size of the body, which is either pale yellow or white. In a termite colony, there are workers, soldiers, and mature reproductive adults. The latter is dark brown in color and have fully developed wings.

Termites can deceptively look like flying ants. The differences between ants and termites significantly impact what kind of service you need to control them in your house.

Often, damage caused by termites is confused for a case of the carpenter or fire ant infestation, due to their similarities. While ants have bent antennae, the termites’ antennae are straight.

Termites also have wings of the same length; however, ants have wings of different lengths. The termite swarmers are only around one-fourth of an inch long, which is about the size of a pencil eraser.

These are some of the largest termites in the world and are around 25 millimeters in length. These termites have about twenty different species in the world.

They usually live in forests and make their nests in rotten and wet woods, usually on the forest floor. The workers of this type are pale milky white, while the darker colored soldiers have a brown head.

These termites are best known for their need to nest in contact with soil, although there are some exceptions.

The soldiers of this type of termites have ‘pronotum’ which is a flat area behind the head. This part can produce a kind of defensive fluid.

The Nasutiform termites are not actually harmful to your homes, rather they are beneficial to the ecosystem of the desert regions.

These termites build large mounds and are found in the tropical climates of Africa, Asia, Australia and some are also found in the North American deserts. The mounds that they make have been recorded to be as high as eight meters tall.

Termites consume mainly wood and other plants, which gives them the necessary cellulose for nutrition. They are very secretive, as a result, they seldom come out in the open.

The most visible sign of termite presence around the house is swarming. They swarm to attract mates and begin new colonies. They mainly communicate through chemical means. They release pheromones to sound alarms, leave trails, establish contact or to attract a mate.

Usually, subterranean termites live in the soil by building large mounds, which also have interconnected and elaborate tunnels.

Through these mud tunnels, they can access food sources situated above the ground. Drywood termites are the ones that make their homes in wood. They also infest walls and home furniture, causing damage to human-made structures.

Termites go through what can be called an incomplete metamorphosis, also known as a hemimetabolous life cycle. Due to its life cycle, three types or caste types of termites are found. These are the reproductive termites, workers, and the soldiers.

The queen lays hundreds of eggs, and once an egg hatches, this stage is called the larval stage. First, it hatches from the egg to become a larva or nymph; the next stage is the older nymph. It can then turn into either a worker, a soldier or a supplementary or secondary reproductive termite.

These changes happen due to environmental, social or pheromonal reasons. In search of a mate during summer, the queen and king termites swarm and form large groups. During this time, the mates have a courtship dance, and then they begin their own colony.

Along with the queen, the male shares the labor, and the baby termites are born from the eggs laid. Both the workers and soldier termites happen to be sterile.

When there are termites in the house, you can determine their presence through their wood colored fecal remains, which look like pellets.

Signs of damage are prominent with termites. They tend to live near sources of wood and bore holes in it. They can make large galleries in houses or in places that they build their nests in.

If you see wood pellets lying on the floor, near baseboards and doorways, you definitely have a termite infestation.

As some species of termites make mounds, you can sometimes find mud tubes or mounds around support beams, wooden posts or exposed wood lying around. You might also notice holes in the wood surface or signs of wood becoming thin in places. 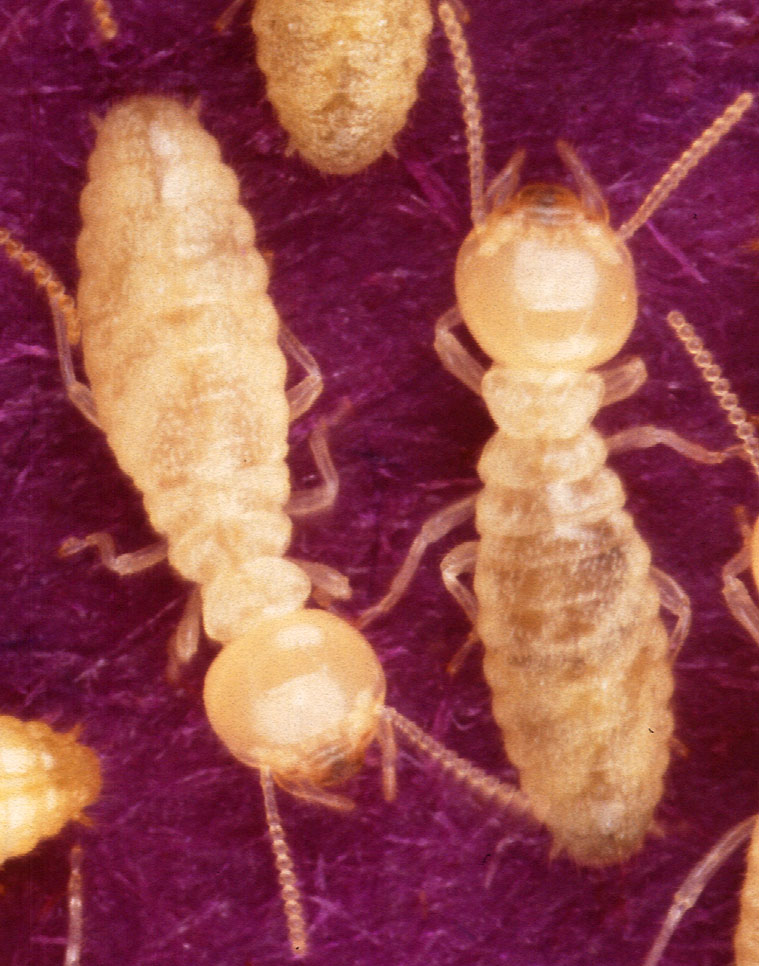 The primary damage done by termites is that of furniture and walls. They eat into your furniture and make them weak, the walls also become hollow, which is harmful to your home.

Termite damage looks a lot like water damage, the wooden floors appear swollen, there is buckling on the woods, and wooden ceilings also look puffed up. The scent is similar to mold or mildew.

Termite bites, though not toxic, but might sting a little. These bites are not known to carry any germs or diseases that are harmful to human beings.

However, those who are living in termite infested homes might even get asthma attacks. Some people are allergic to termites, their droppings or saliva. They also render significant damage to clothes and paper.

To prevent a termite infestation, you should start by eliminating moisture around your house. For this, you can repair leaking water pipes, exterior units of your AC and faucets. Rotten roof shingles and other wooden materials such as fascia and soffits should also be fixed.

Signs such as mud tubes, bubbling, uneven paint and hollow sounding wood should not be neglected. You can check the wood by tapping for a hollow sound.

You should also monitor all areas of wood in the exterior including doorframes, windows, and skirting boards for any noticeable change.

If you have a termite problem on your property, call Rest Easy Pest Control. We will inspect your house and treat your termite infestation problem immediately.*** 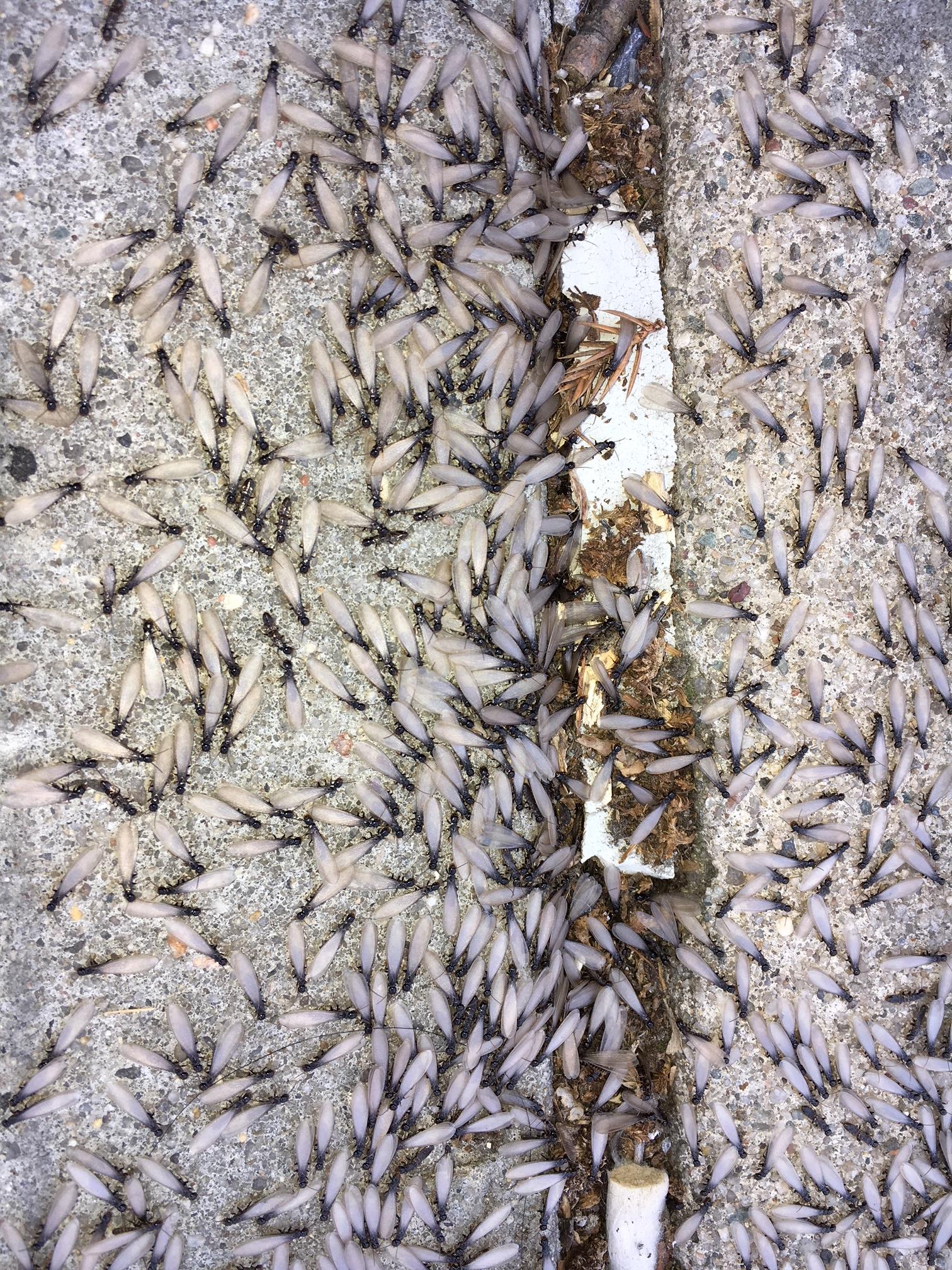