Ants are a prevalent species of insects that are detected in households and the most common ones are black or reddish brown in color.

There are almost 10,000 species of ants. The most common ones are the Pavement Ants, the Carpenter Ants, and the Argentine Ants.

If you need an ant exterminator, give Rest Easy a call. 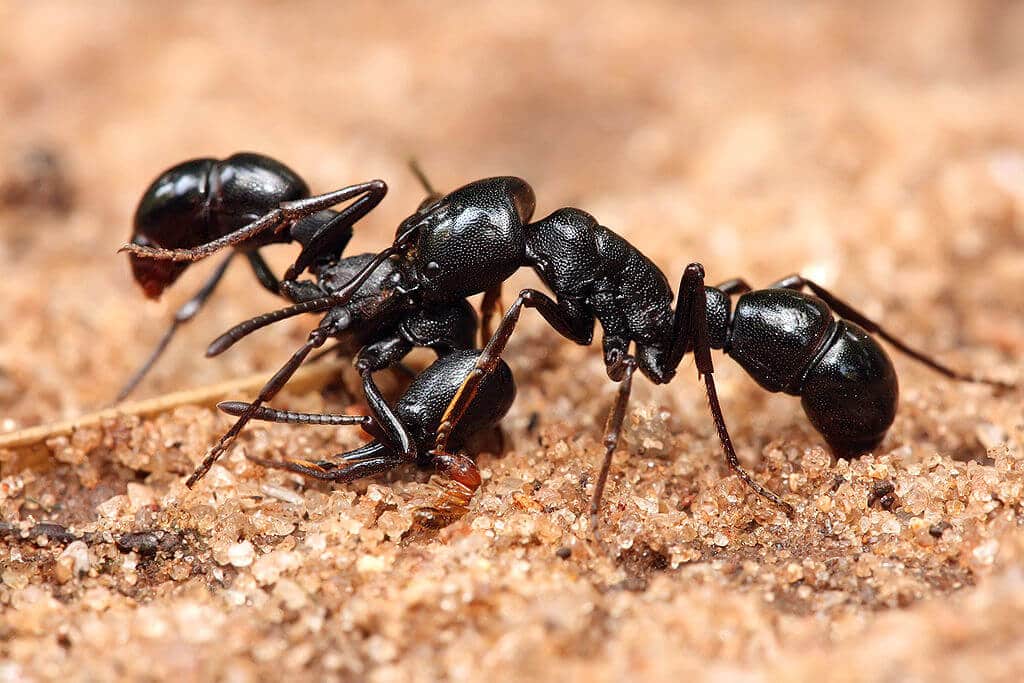 Ants have a size of 5 to 8 mm. Ants have a tough exoskeleton made of Chitin. They have three distinct body segments; head, thorax, and abdomen. The head consists of two compound eyes, a pair of antennae and a set of jawbones.

Usually found in the US, especially in the Midwest. They depend on meat, insects, and grease. They nest under pavements and behind walls.

Found in the US, these ants measures 3.4 to 13 mm in length. They burrow holes in wooden structures. Food sources vary from various sweets to meats.

Usually brownish in color. They are found nesting under the soil, under logs, wood, and debris. They construct massive colonies and consume sweets.

Ants use their set of mouths to carry foods and eggs. They use pheromones or chemical substance to create trails. They are very social beings. They have queens, males and workers to distinguish tasks in their colonies.

The queen mates with the males and lays eggs. The males die after mating. The worker ants usually do the job of building nests, collecting food, segmenting and taking care of eggs and larvae.

They usually depend on meat sources, sweets and greasy materials for food. They typically hunt in groups. They are omnivorous in nature. They are apex predators and can consume from small insects to big rodents. They usually feast on dead animals.

Ants usually build nests in a different sort of spaces. Some burrow into woods and logs. Some burrow nests under the soil. Some create nests behind walls and under pavements. Some even live inside debris and cavities of trees. They prefer infesting moist and damp areas. They will inhabit unhygienic environments.

Ants can become a nuisance in the house if it is not clean. Some ants can survive in dry habitats too. The size of their colonies can vary by a lot. Some build super colonies while others build small ones.

The colonies have chambers for egg preservation, larvae, and the queen’s chamber. The workers have separate chambers to inhabit. The supercolonies can split into various nests with multiple queens and worker groups.

The life cycle of ants is simple. Like most, they hatch from eggs. Then they develop into larvae then pupae and finally adults. The eggs are laid by the queen in the chamber. The unfertilized eggs will turn into worker ants while the fertilized eggs into female ants.

The eggs evolve into larvae. They look like small worms. The body is soft, and the head is small. Their diet influences their gender mainly. The larvae constantly transform shape to turn into pupae.

The ant pupa looks almost like an adult ant except for their folded wings and antennae. The adult ant is the final stage of their cycle. In this stage, they leave their cocoon. They cannot grow anymore, and life durations vary.

Ant infestation signs are all around the house. A bunch of ants here and there are an obvious sign of early infestation. If you notice them in the kitchen or the dining hall, it is a clear indication that they have made their way inside the house.

There are several prominent signs that ants have infested the house. The first noticeable sign is the presence of ants in large numbers inside the house.

If you notice large groups of ants near your food or where you store it, it means that they have infested your house. You might also notice ant pathways, like trails of ants and holes burrowed in the wooden surfaces or cracks and crevices of walls. This ensures ant infestations.

There are various ways to avoid ant infestations. One of the ways is to keep your house clean. Since they love to infest unhygienic environments, keeping the house clean is a must to avoid infestation. They like wet and damp places.

Thus, keeping the house dry gets rid of most common species of ants. Another approach is to seal the cracks and crevices of wooden and cement walls. You can also clean up their pheromone trails using detergent or other house cleaning chemicals.

Later on, you could try different ant repellent chemicals. You could also use different sort of ant baits or insect killing sprays with tubes.