Inside homes, the housefly prefers to sit on walls, floors, ceilings, or any place which is in close proximity to a food source.

Within 24 hours, the larvae, also called maggots, emerge from the eggs. They have a pale color and are 5-8mm in length.

Houseflies don’t cause massive damage to structures. However, they are unwelcome guests that can destroy your peace of mind and spread a variety of harmful diseases. 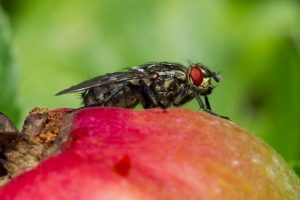 Houseflies usually have a faded gray color and range in length from 4 to 8mm. Four characteristic dark stripes adorn their thorax. The entire body of the housefly is covered with hair-like projections. They don’t bite humans. Instead, they use their protruding mouthparts for sucking.

Two transparent wings about14-15mm wide are attached to their thorax. The hind wings are much smaller in size and help the housefly to stabilize itself during flight. The female housefly is larger than a male housefly and has a wide gap between the eyes.

Inside homes, the housefly prefers to sit on walls, floors, ceilings, or any place which is in close proximity to a food source. Outside, they prefer to nest on plants and garbage. They are adept at flying and can travel up to 8km in a single go.

They reproduce throughout the summer season and only stop breeding a couple of weeks before winter. Their most loved foods are animal dung, human waste, rotten produce, and animal excrement.

They can only suck on liquids or semi-liquid foods; such is the functionality of their mouthparts. When they come across solid food, they spit their fluids on it to convert it into solution form to prepare it for sucking.

Adult fruit flies are 1/8th of an inch in length and have glowing red eyes. They have a tanned upper body and a black lower body. They have transparent wings with distinct brown markings.

A cream-colored band is present on their thorax, and a visible yellow stripe on each side of their body. The humeri (shoulders) also have a pale yellow color. The abdomen narrows down at the rear end and broadens at the front end.

Fruit flies are found in restaurants, homes, and any other place which has rotten and fermented food in abundance. They also breed near the wet surface of organic materials.

After hatching, the larvae nourish their appetites on the same organic fermenting mass. Under favorable conditions, the fruit fly can lay around 500 eggs. It takes only a single week for an egg to develop into a fully-functional adult fruit fly.

Fruit flies also like to reproduce on garbage, discarded bottles, and cans, cleaning rags and drains. All their eggs need to thrive is moisture and fermenting produce.  Adult fruit flies can easily fly into your homes through cracks or gaps in windows and screens.

Drain flies have a black or brown color, and range in length from 1/7 to 1/3 mm. Intricate patterns cover their wings and entire body, giving them a vague appearance. They are commonly known as moth fly because they have wings oriented in a similar pattern (roof-like stationed over the body).

As it is evident from the name, the most preferred habitat drain flies is a drain, especially in a sewage treatment facility. They compensate for their poor flying ability by hopping and jumping.

They come out to mate and forage on food during the night, and are especially attracted to outdoor lighting. If conditions remain favorable, the development of a drain fly completes in around 2 weeks. A female has the capacity to produce 100 eggs in a single reproductive cycle.

Drain flies may also be found wandering in wet areas, around bathrooms and kitchen sinks. They can also reproduce in hot and humid conditions, or in places that have a lot of debris.

The female fly lays eggs in batches of 80 to 160 near the surface of manure, composite or other damp material. Within 24 hours, the larvae, also called maggots, emerge from the eggs. They have a pale color and are 5-8mm in length. They keep on developing for the next 2-3 weeks. After feeding plenty of food, they move to a cool and dry place to pupate.

The pupae have the same size as the larvae and are barrel-shaped. They have a distinct outer coating, which is brownish in appearance. After a period of 4 weeks, the pupa transforms into an adult fly. After completing development, the adult fly lives for about a month, after which it eventually dies.

Houseflies don’t cause massive damage to structures. However, they are unwelcome guests that can destroy your peace of mind and spread a variety of harmful diseases. They contaminate food sources with viruses, bacteria, and fungi they get infested with.  The most common diseases spread as a result of a fly infestation are dysentery, tuberculosis, cholera, and typhoid.