Water bugs have a dark color, and their body is shaped like a boat; this design helps them to swim on their backs.

Water bugs spend most of their lives underwater, in moist and dark places, far from the reach of their natural predators.

A water bug undergoes gradual metamorphosis, which is broken down into three stages ― egg, larva, and adult.

Water bugs play dead when threatened. In extreme circumstances, they bite their attacker to protect themselves. 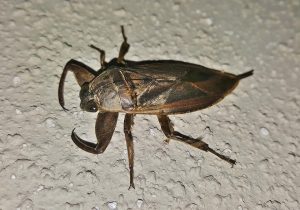 Waterbugs are brown in color and their body is shaped like a boat; this design helps them to swim on their backs. They have a pointy, compact and sucking beak located on the posterior portion of their head.

They have six legs, two in the front for collecting food, and four in the rear for moving forward. They don’t have gills and store air bubbles inside their body to breathe underwater. They also have fully functional wings for flight. Their size varies from species to species.

Water Scorpions are named for their forelimbs that have the appearance of a scorpion’s anterior pincers. Their long and protruding breathing tube is also similar to a scorpion’s curved stinging tail.

There are two varieties of water scorpions, one is slender as a stick, and the other is fragile and leaf-like. Water scorpions are carnivorous. They strangle their prey with their front limbs and feed on its body fluids.

Giant Water Bugs, as the name suggests, are large insects that live in the calm waters of freshwater streams and ponds. They are “stealth ambushers.”

They silently hide behind plant parts close to the surface and pounce on their prey with their powerful front legs when the opportunity presents itself. They dissect the prey with their sharp beaks and release enzymes to digest its body tissues. They hunt small fish, aquatic invertebrates, and tadpoles.

Water boatman is named for its thick hairs that surround its legs like oars. It has a long, flat and distinctly black and brown striated body that is 13mm in length. Like most water bug species, it has two short legs in the front for seizing its prey and four long legs in the back for forwarding motion.

Unlike other members of the waterbug species, it is herbivorous and fills its appetites on water plants and algae. Its saliva contains specialized enzymes that dissolve the parts of a plant, rendering it fit for ingestion.

Water Striders are easily identifiable by their enormously long second and third pair of legs that are almost two times larger than their main bodies. The front legs are significantly smaller and are used for capturing prey.

They are carnivorous species and feed on larvae and small insects. They don’t secrete enzymes externally on their prey, instead push it inside their mouths and suck it dry. These insects can’t sense prey above or below the surface of the water because of their limited sense of hearing.

Waterbugs play dead when threatened. In extreme circumstances, they bite their attacker to protect themselves. Bugs don’t live in packs. They are solitary insects that hunt and live alone.

They are amphibious organisms and live a fair share of their lives in aquatic environments. Many people have reported water bug sightings in leaky pipes. They also like places that are hot and humid. No wonder, they are found in large numbers in the U.S.

As the name suggests, waterbugs spend most of their time in the water, in moist and dark places, far from the reach of their natural predators. If your garden has standing water, there’s a big possibility that water bugs will breed in it.

You can commonly found them nesting in leaky faucets, moist firewood, and small herbs and shrubs and any kind of wet environment. They resurface to the solid ground only to catch their breaths because they aren’t great at breathing underwater.

A water bug undergoes gradual metamorphosis, which is broken down into three stages ― egg, larva, and adult. It takes 600 days for its life cycle to complete. One week after reproducing, female water bug lays strong-coated oval eggs.

The egg goes through several stages of rapid growth and already is capable of hunting prey. However, it doesn’t have developed wings at this stage.

In adulthood, it becomes a fierce predator with a fully-functional set of wings. An adult male water bug’s body is divided into 19 segments, whereas a female has 13 parts.

Water bugs can enter your home and are masters of infesting houses. It is one of the most frequent pests that inhabit sewer systems through which it can easily get access to homes. Waterbug infestation is an alarming concern and must be controlled immediately before it aggravates.

Here are signs of a water bug infestation:

-Pungent and musty odor inside the house

-They shed their skin so look for fragments of water bug limbs and wings scattered around the house.

The bite of water bug is really painful. These pesky insects dissolve body tissues through their specialized enzymes and suck fluids from them. Some species, especially toe-biter and backswimmer, attack you underwater if your feet aren’t protected.

Their bite stings and can cause swelling. Some species are completely harmless. They don’t transmit any life-threatening diseases; however, prompt medical attention is advised after a bite, especially when a water bug bites a toddler.

-Make sure that the lids of utensils and other food containers are tightly closed.

-Carefully dispose of garbage in trash cans, and don’t forget to close their lids.

-Don’t let water accumulate in any part of the house. If you have a leaky faucet, get it sealed with inorganic caulk. Standing water attracts water bugs like cheese attracts mice.

-Water bugs hate the smell and taste of vinegar. Pour it in the watery places inside and outside of your home, where there is a possibility of a water bug invasion.

-Sugar and baking soda also have the same effect as Vinegar and are equally effective in keeping the bugs away.

-Liquid detergent and cooking oil is also another option.

-In case you have this wild hunch that they are breeding in some place, pour borax there to destroy their eggs. 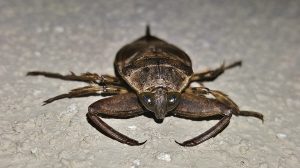