Licensed, insured and operating at full service at all times of the day and night as well. It should come to no surprise that Rest Easy Pest Control is recognized as one of the best exterminators in Nassau County, which includes the area of Oyster Bay, NY.

Not only do we specialize in pest control, but we have also been responsible for repeatedly eradicating rodents and wildlife in the area. So here it goes- anytime a homeowner is having any difficulties regarding pests, rodents, and wildlife, Rest Easy Pest Control is the go-to company to call for.

The very definition of the word ‘pest’ is related to an annoyance or irritation of some sort, and that is exactly what a pest does. However, the reason people are wary of pests is that in addition to being annoying, they can also be downright dangerous.

A fact to be noted about pests is that often their victims may be left unaware of the very destruction they may be causing until it is too late and major damage has been done to the structure of the house.

The Major Enemies to the Homeowners

A good example of such a pest is the termite. Termites are tiny invisible creatures which gnaw at the wood to transform it into natural soil. Unless you want to end up living in a huge sandcastle which is worth nothing, it may be advisable to consult a qualified and experienced pest service such as Rest Easy Pest Control to avoid such an infestation.

In addition to pests such as ants, fleas and ticks, rodents such as rats and mice are also major enemies to the homeowner. The most common types of rodents that inhabit Nassau County are the Norway rat and the Roof rat.

The Norway rats are also known as brown or sewer rats. True to their name, these rats are usually found in dark and underground areas such as under building foundations, beside rubbish piles, in gardens and many more. 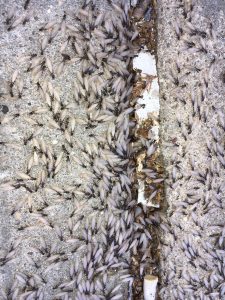 “A fact to be noted about pests is that often their victims may be left unaware of the very destruction they may be causing until it is too late.”

Usually, when these rats build nests, they take refuge in the basement and ground areas. On the other hand, roof rats, which are also known as black rats, take shelter in upper floors like attics and ceilings. This is because Roof rats are fast climbers.

Although you may now be able to identify a type of rat, there are other ways of knowing if you may be experiencing a rodent infestation. Two common signs are rat droppings around kitchen areas or near other food storages and noises coming from the attic at night.

The existence of rat burrows may also prove to be solid proof of the fact that there may be rats in the house. In that case, it is of utmost importance to call a pest control service, instead of trying to handle the situation by oneself.

Effective Method to Get Rid of Your Pests Problem

An issue as serious as rodent control is no amateur’s field of work. Since Rest Easy Pest Control believes in minimizing the use of pesticides to the maximum extent, our two major methods for dealing with rodents are rat trapping and rodent proofing.

The range of the animals we help homeowners help get rid of consists of raccoons, opossums, bats, squirrels and more. Spray repellents and regular traps may not work on these unwanted creatures, possibly due to their larger size. In cases such as these, it is strongly advisable to take the assistance of experts in dealing with these wildlife creatures.

In addition to taking care of pests, our local exterminators for pest control in Oyster Bay, NY also prefer to go the extra mile by offering preventive measures and educating our clients on the various types of pests that may enter their house.***