Termites don’t spread disease, they aren’t aggressive, and they don’t bite. But these pests can destroy both your home and bank account.

Here are 6 interesting facts about termites you probably didn’t know. 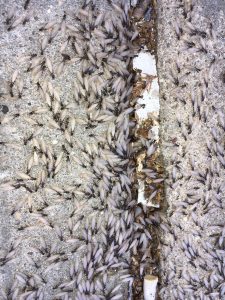 #1. Can Termites Eat Your Life Savings?

Keeping your money in a safe place isn’t just about keeping it safe from people who might try to steal it; pests can be equally destructive to your savings. A Chinese man living in the province of Foshan had stored 80 thousand yuan—his life savings—in a shed behind his house. (He was wary of storing the money in a bank.)

His name was Feng, he was in his 60s, and he earned this money the hard way: working as a fisherman. It took him years to earn those 80,000 yuan, which was in the form of paper bills that he stacked in eight bundles and stuffed in a bag.

After several months, Feng went to check on his treasure. To his horror, he found the bag full of termites, which had destroyed around half of the money. Police helped Feng piece together the torn up notes, but they weren’t able to accomplish much due to the extensive damage.

Termites look like white ants, and they like to feast on cellulose—something that humans can’t digest. This means termites love wood, and since paper comes from wood, it makes sense that termites would like paper bills. But even if you don’t store all your money in a shed, it’s worth getting your home inspected and using termite control even if you think you’re termite free.

In many cases, termites do serious damage to the structural integrity of a home before anyone suspects a thing. For some perspective, it’s estimated that termites cause $5 billion in property damage per year—and that’s just in the US.

Termites are great master builders. Even though several of them could fit on your fingernail, together they can build structures up to 17 feet high. So, how do termites accomplish what they do? How do they coordinate these massive construction projects?

That’s the question Dr. Scott Turner has studied for the past 26 years. He is an animal physiology professor at the SUNY College of Environmental Science and Forestry in Syracuse. Dr. Turner has laser-scanned termites, tracked their movements with microscopic beads, fed them fluorescent green water, and created computer simulations of termite behavior.

Turner says termite mounds can take four to five years to build, and a torrential downpour could destroy one at any moment. Termites are constantly fighting erosion and re-patching their mounds where nature has damaged them.

They accomplish this via intricate sensors that detect slight changes in gas concentration and humidity. Then they communicate these changes to other termites via vibrations and touch which then relay the message to other termites. And with a quick domino effect the whole colony can be mobilized. 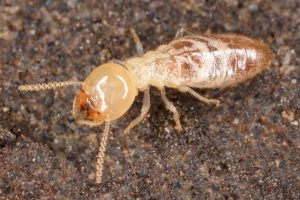 “It’s estimated that termites cause $5 billion in property damage per year—and that’s just in the US.”

A recent study published in Nature Climate Change suggests that termites may play a far bigger role in global warming than we previously thought. Behind wetlands, termites are the second biggest source of natural methane emissions. Methane is an important greenhouse gas.

In the study scientists distributed 160 blocks of wood across five different forest areas and measured how quickly the blocks decomposed. They found that termites and other decomposer organisms explained three-quarters of the variation.

It’s speculated that if global warming continues termites may be able to spread farther north than they currently do. This would mean a faster rate of carbon emission from forests via termites chowing down on more felled trees. And this would mean more methane which could lead to further global warming through a positive feedback loop.

No single pest should trigger a quicker “mayday” reflex upon being found than termites. They don’t spread disease, they aren’t aggressive, they don’t bite, and they don’t remotely care about humans in their vicinity. What they do care about are 1) breeding and 2) eating. That’s it.

The problem is, they breed all the time, and their favorite food might be located inside your home.

Here are some facts on these impressive, destructive creatures:

#6. What Are Tree Termites?

South Florida is under invasion by a particularly destructive breed of termites from the Caribbean. The invaders, nasutitermes corniger termites, are commonly known as tree termites. They live above ground, and they build brown tubes up the walls of houses and other buildings as they forage.

Although they aren’t native to Florida, one city there—Dania Beach—has been struggling with them since 2001. After believing they were eradicated at that time by heavy spraying, they have recently turned up again. They were likely first transported to Dania Beach by ship, stowing away on wooden pallets that were unloaded in a local marina.


The Florida Department of Agriculture, recognizing the potential damage due to the increased termite infestation, isn’t taking the threat lightly. In May, department employees treated the nearly 50 properties where the termites have been reported.

Because these termites live above ground they aren’t competing with the native subterranean termites. So, homeowners in South Florida face the prospect of a 25–30% increase in overall termite populations, said Rudolf H. Scheffrahn, a professor of entomology at the University of Florida.

Neighbors in the infested neighborhood report rapid damage to trees and firewood. Also, wood handles of shovels and rakes being turned into mulch. Much worse; termites can quickly destroy a home once they begin attacking it.

If you have a termite problem, let termite extermination experts take care of it for you. Call us so you can rest easy.