What Is the Difference?

It is important for one to be familiar with the look of termites so that they can get termite control early enough before they wreak havoc. Unfortunately, most people are only familiar with adult termites and not their larvae or baby termites. 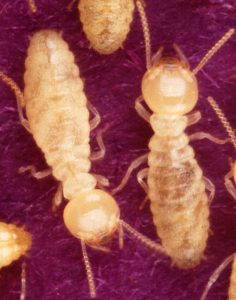 The presence of termites near or near a property will send chills down the spine of any homeowner. Although they are tiny, these insects are capable of causing serious damages to a building as they can go undetected for a short time in which they’ll have eaten a significant part of a wooden structure.

The recent research shows that Americans spend approximately a billion dollars every year to amend the damaged caused by the pests as well as their control.

It is paramount for one to be familiar with the look of termites so that they can be controlled early enough before they wreak havoc. Unfortunately, most people are only familiar with adult termites and not their larvae (baby termites).

The Life Cycle of Termites: Termite Eggs to Adult

Their lifecycle is not as straightforward as of the majority of other insects’ which is normally very linearly simple; starts with an egg, then larvae, pupa and finally adult developmental stages.

When it comes to termites, they lack the pupal stage. Instead, they have a lifecycle with extra valuables which can influence a larval termite to develop into any of the numerous types of adult termite.

The termite lifecycle starts with the laying of eggs by the queen. The eggs are tiny and white in color. Later, the eggs hatch into tiny whitish larvae known as termite nymphs or baby termites.

The baby termites resemble their adult counterparts only that they are smaller and paler. With time, the baby termites develop into any of the four types of adult termites; to workers, soldiers, queens or drones, and fulfill their roles in the ecosystem.

“When it comes to termites, they lack pupal stage. Instead, they have a lifecycle with extra valuables which can influence a larval termite to develop into any of the numerous types of adult termite.”

Now that many people can identify adult termites, it is paramount to delve on baby termites since they are part of the genesis of severe termite infestations.

We have seen that baby termite look like their adult colleagues, the only difference being that the former are smaller and paler than the latter.

However, as they develop, the young termites become darker in color and bigger in size. The presence of baby termites in your place indicates a high likelihood of a more serious termite infestation.

“We have seen that baby termite look like their adult colleagues, the only difference being that the former are smaller and paler than the latter.”

Baby termites undergo a process called molting, in which they shed their exoskeletons numerous times as their body sizes increase and approach maturity. All of them look similar since they are not yet assigned any particular role in their castes.

However, upon the establishment of a colony, the young termites can be distinguished as alates, workers or soldiers. You can easily distinguish alates from the rest as they have wing buds developing on their thoraxes.

In fact, most of the baby termites develop into alates (swarmers). The primary role of alates is reproduction and creation of new termite colonies. The baby termites that fail to grow wings or wing buds become workers or soldiers.

The main functions of worker termites are to look for food for their colonies and building and maintenance of their nests and mud tubes. On the other hand, soldier termites are responsible for the defense of their territories.

Baby termites cannot feed themselves and thus cannot damage your structures. Nevertheless, this doesn’t make them good angels anyway since they eventually become destructive adults. Besides, in as much as they can cause any damage themselves at their larval stage, baby termites are dependent on worker termites for food.

So their presence means that there are worker termites somewhere getting cellulose from your wooden structures in order to feed them. Therefore, premature termites can have an indirect destructive impact on your building.

In as much as the term baby termites may sound innocent, you can’t afford to allow these insects roam freely near or inside your home. Seek a professional pest control company with expert termite control services if you suspect or find them at your place before they develop into a serious termite damage problem.