Termites are one of the most dreaded pests in New York as they can cause considerable damage to both your house and your bank account. In fact, termites cause around five billion dollars worth of damages in the U.S. annually. This is because we often don’t even come to know that we have a termite infestation until it is too late. 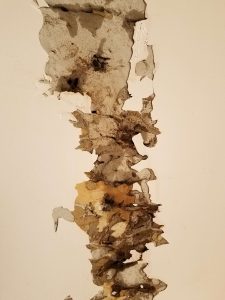 From sagging floors to damaged ceilings and ruined foundations to hollowed out furniture, termites can be quite a nuisance to property owners in NYC and Long Island.

Though prevention is much easier than dealing with these insects, it is important to seek the services of a good termite control company as soon as we notice signs of termites in our home.

Termites, just like bees, are social insects. They live together in social groups known as colonies. A colony can have as many termites as one million or as few as two of them. A termite colony contains various castes of the insects.

New research from the University of Sydney reveals some species of termites can thrive and reproduce without males. The research showed six of 10 termites populations analyzed were made up of asexual females. The termites studied were of the Glyptotermes nakajimai species based in Japan.

The finding has contradicted to the long-standing knowledge that a termite colony generally contains male and female reproductives and workers. The castes include workers, soldiers, reproducers, king, queen, and immature termites. However, the composition may vary depending on the type of termites involved. Let’s have a look at these classes in details.

The majority of workers don’t have wings, and their bodies are soft and small approximately six to eight centimeters. Although some harvesting species have compound eyes that are well developed, most termite workers don’t have eyes.

The workers account for the largest proportion in the majority of termite colonies; their population in a colony ranges from 80% to 90% of the entire colony population.  You are most likely to see them when you disturb a termite-infested wood item.

In some cases, especially in primitive families, there are no workers. In such scenarios, the unfertile adults (of both sexes) and the young termites which haven’t reached adulthood perform the duties of the workers.

While in the acting capacity, the termites are known as false workers and can continue being so throughout their lifetimes or can change to become reproductive castes with wings.

The primary functions of the workers in a colony include looking after eggs and nymph termites, searching for food,  feeding and cleaning their nest mates as well as maintaining the structures of their colonies. Besides, some species of worker termites offer protection to their colonies.

The termite soldiers defend their colonies from invasion by predators and other enemies.  They don’t have wings and are larger and with darker heads as compared to the workers. A termite soldier has a big head and stout, and its mandibles are very powerful.

Although some species are eyed, the majority of the soldiers don’t have eyes. The soldiers account for five to eight percent of the whole population of a colony.

Some species of soldier termites have frontal glands which produce acrid, a substance which they use for defense against their enemies as well as to dissolve hard substances such as concrete structures. Other species like Rhinotermitidae use a secretion called nasutoid soldier for protection against their enemies. 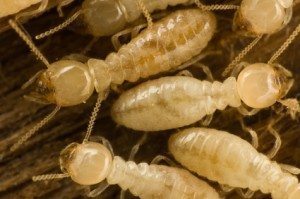 In a termite colony, the reproducers are the female and male termites with reproduction capability.  The function of these termites in a colony is to reproduce, and some of them later become kings and queens. They have darker bodies (yellow, brown or black) as compared to other castes in a colony and this makes them stand out from the rest.

During its early adulthood period, a termite reproducer bears two pairs of equal-size wings which are longer than its body. However, after a swarming flight, the wings fall off, and the reproducers start to form new colonies.

The queen is the largest termite in a colony, with a length ranging from 60cm to 80 cm. There is only one queen in a colony. It is a female termite whose major role in a colony is to lay eggs. A queen can lay over a thousand eggs in one day.

She lives in an exceptional chamber known as the nuptial chamber. The queen can produce a social pheromone, a substance that plays a significant role in the maintenance of the integration as well as the size of a termite colony.

A king termite is an adult male with reproduction capability. It is smaller as compared to the queen and its major role in a colony is to mate occasionally and fertilize the queen. Just like the queen, there’s only one king in a termite colony.

“The majority of workers don’t have wings, and their bodies are soft and small approximately six to eight centimeters. Although some harvesting species have compound eyes that are well developed, most termite workers don’t have eyes.”

Here are some of the signs of termite damage that you must watch out for:

Since these termites build their colonies under the ground, they often go undetected. We become aware of their infestation only after the damage to the foundation or the flooring becomes evident. They gain entry into our homes through cracks in the foundations. You can recognize a subterranean termite infestation through these signs:

Termites build mud tubes as a conveyance around your home, often leading to water sources. These mud tubes can be found in a variety of locations, but your foundation is a typical place to look for them. If you’d like, you can break open one of these mud tubes and look for any termites inside.

These tunnels, generally brown, dry, and rounded in appearance, extend from the ground to the infested wood. The presence of these tunnels, made from mud, feces, and saliva of termites, is a sign of termites in the house.

A physical evaluation can often be the most helpful in identifying any infestation. If you’re not sure if the winged insects are termites, capture one in a jar and take it to your local pest control expert for identification. If you notice winged termites coming out of subterranean tunnels near the foundation of your home, it is time to call pest control.

Another common sign of subterranean termite infestation is damaged and sagging floors. Once termites get inside your wood, they will often eat out the inside of it. This can leave your wood hollow and weak.

These termites burrow into the wood but do not damage the surface. You will be able to detect the damage to your floor if you walk around the floor checking for some hollow sound.

If termites have invaded your home, it is also common for you to find small holes in your walls. Larger holes may belong to carpenter ants, but the smaller ones typically indicate termites.

Unlike their subterranean cousins, dry wood termites make their colonies in the wood that they feed on. Their maze of tunnels keeps on getting deeper as they continue to feed on the wooden structures. You can recognize a dry wood termite infestation through these signs:

This is another surefire piece of evidence that you might have a problem. Termite droppings, which are often referred to as frass, is commonly found near the entrance of their tunnels. They look like tiny wood colored pellets.

A soft tapping noise can be heard where the dry wood termite infestation is huge. The sound comes from soldier termites banging their heads and mandibles against the wood to signal other termites.

Reproductive termites fly away from their nest to make new colonies. Termites often discard their wings once they’ve found a place to reproduce and eat. If you don’t want to bring an exterminator into your home quite yet, you can take some of the wings to your local expert for identification.

Drywood termites can hollow out the wood that they infest. Be it furniture or even door frame, these termites hollow them out, keeping only the surface intact. If you detect any of these signs in and around your home, take action immediately. 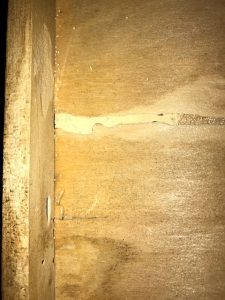 A drywood termite infestation can be devastating to your home. Once these wood-eating pests get into your home, a colony can number in the tens of thousands before you know it. Some colonies can even reach hundreds of thousands if left untreated.

And thus, lies the question: How do you treat an infestation of these critters? After all, once you know your house has them as “guests,” it’s important to get rid of them as quickly as possible before they cause too much damage.

While termites typically eat rather slowly, even in large numbers, the cost of damage to your home can be devastating if the situation gets bad enough. To prevent this from happening, let’s take a look at a few treatment options for a drywood termite infestation.

This is a bit of a no-brainer. One way to get rid of many types of insects is by the use of deadly poisons. Drywood termites, which reside in your home’s wood rather than the ground beneath your home, can often be susceptible to such treatment.

Why is fumigation sometimes recommended for drywood termites? For one thing, your home may have more than one colony inside it. By fumigating your entire house, you’ll be sure to get rid of all colonies at once, instead of attacking them one by one. 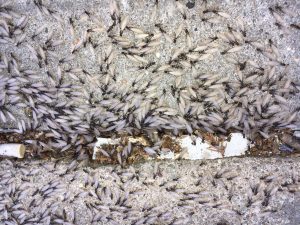 “While termites typically eat rather slowly, even in large numbers, the cost of damage to your home can be devastating if the situation gets bad enough.”

If you’d prefer not to attempt fumigation, you might want to try a heating application. This is similar to how some pest control companies deal with bed bugs. Drywood termites can’t deal with the heat very well. Once temperatures pass around 140 degrees, the heat will begin to kill them.

Like fumigation, this is something you’ll need to do while you’re not at home since it’s unlikely that you’ll be able to bear the extreme heat. With this treatment, keep in mind that it isn’t typically a “whole house” kind of thing. Instead, areas such as bedrooms and attics will be concentrated on.

On the other side of the spectrum, you have the use of extreme cold. This is typically used in a smaller area — colony by colony — and focuses on hard to reach places where termites are likely to reside. These areas include all the little cracks and crevices where they might have taken up residence.

With this technique, liquid nitrogen is utilized to cool these smaller areas of your home. In most cases, the temperature is brought down to -20 degrees Fahrenheit.

Since a termite infestation strives at moderate temperatures, lowering the temperature to such an extreme will quickly reduce the number of these house-destroying pests by first freezing the imposing creatures and then swiftly killing them.