All Things You Should Know About the Sprickets

Although these insects are mostly found outdoors, they sometimes find their way to indoor areas, especially in dark and damp places. 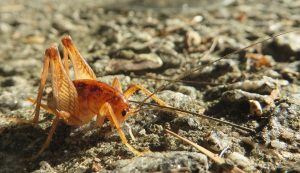 What Are Camel Crickets?

The camel cricket, which is also referred to as a cave cricket and spider cricket or spricket is a small insect belonging to Rhaphidophoridae family. They have a wide range of colors from light to dark brown.

Although these insects are mostly found outdoors, they sometimes find their way to indoor areas, especially in dark and damp places. There are several facts that you should definitely take into account when you face an infestation.

Unlike the crickets of Gryllidae family, camel crickets are not true crickets because they have humpbacks as compared to the flat bodies of their counterparts (true crickets). These insects come in different species, each featuring a distinct body color.

For instance, while those prevalent in the U.S have light brown bodies with dark brown strips, others have spots instead of the streaks. On the other hand, secret cave crickets which are prominent in Central Texas are grayish-yellow in color. Young crickets usually have translucent bodies.

Generally, spider crickets have longer hind legs as compared to the front legs. When measured without including legs, the length of the body is at most 5 cm but when the legs are factored in, the length can be up to 10 cm.

Each camel cricket has a total of six legs which are very tall to enable it to jump high, especially while avoiding a predator. These insects also have long and thin antennae which are responsible for tactile sensing as well as their defense from their predators.

Any adult camel cricket, regardless of its respective species, is wingless while some young ones of some species might have two wings, each. 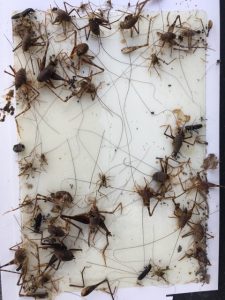 Why Do They Enter Homes?

These crickets are mostly found outdoors but they also enter homes as they look for prey (including insects such as spiders in New York) to feed on.

They also enter homes in order to get quiet, moist and dark places where they can lay their eggs. They prefer laying eggs in such places due to safety from their enemies and the favorable hatching conditions.

However, an indoor infestation is an indication that they have formed habitats in the immediate outdoor area since they mostly take advantage of the nearest human dwelling place.

Therefore, if you have a damp basement, you’re likely to have a cricket problem as camel crickets that are hiding nearby outside might try to come inside to look for food and breeding places.

Can They Hurt You?

They make look scary, but camel crickets pose no threats to humans. They are not poisonous nor do they have the ability to bite you.

Nevertheless, they may cause serious damages to your fabric items such as clothes and linen in addition to defecating on the walls of your building. They are indeed a serious nuisance when the crickets invade your home although they won’t hurt you.

Yes, they are nocturnal insects. They are very good at hiding throughout the day and come out from their hideouts at night to hunt their prey. 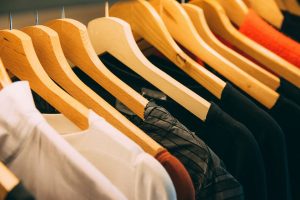 “Sprickets may cause serious damages to your fabric items such as clothes and linen in addition to defecating on the walls of your building.”

Unlike true crickets, camel crickets do not chirp because they don’t have the organs responsible to produce the sounds. And in the ones that do, it’s only the males that chirp. If you’re curious, we’ll tell you a little bit about the science behind crickets chirping. They do it to attract females and to establish the boundaries of their territory.

The male cricket’s chirp can be heard from up to a mile away. In fact, crickets use a sort of makeshift technology to amplify their chirp even more. Male crickets dig an acoustic burrow in the ground with small holes at the top (sort of like a flute) and sing their hearts out. The mechanics of this burrow significantly amplify the amplitude of the chirping.

The male’s chirping will only attract females of his specific species. They are obviously attuned to a very specific frequency of vibrations. When the male detects that the female is near, he’ll switch up his game. He begins chirping at a lower, and more seductive frequency. If all goes well, the two crickets will mate.

They are very good at hiding throughout the day and come out from their hideouts at night to hunt their prey.”

What Do They Eat?

Camel crickets feed on nearly all organic things including tubers, fungi, roots, and fruits. They will also feed on other insects including their own kind. They even eat their dead relatives as well as the eggs of other insects.

When it comes to food, crickets are not picky eaters in any sense of the term. They’re omnivorous, which means they’ll eat plant matter and other household bugs and outside insects. This can be a problem if you have plants either in your home or outside in a garden.

They will chew through the leaves and other parts of the plants for sustenance, damaging the vegetation. A cricket’s bite typically won’t break a person’s skin. They also have a tendency to chew on paper, clothes or whatever else they can get close to.

How to Get Rid of Camel Crickets?

For more info on cricket removal, also check out our article on how to get rid of spider crickets and prevent them from entering your house.