Is the Elephant Mosquito in the U.S. Dangerous to Humans?

Is the Largest Mosquito in the U.S. Dangerous to Humans?

There are many mosquito species, and we all do our best to keep them at arms-length. While this is the full truth about mosquitoes, the fact remains that there do exist some mosquito species that are good guys who help us. One of them is  Toxorhynchites rutilus or elephant mosquito. 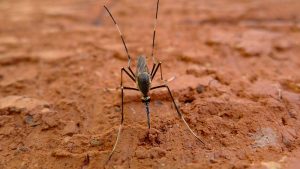 A common perception about mosquitoes is that they are irritating pests that keep buzzing about our ears, giving us sleepless nights. Their bite is feared as they can infect us with a host of diseases ranging from malaria to Zika.

There are many mosquito species, and we all do our best to keep them at arms-length using anti-mosquito repellent creams, sprays, and other devices. While this is the full truth about mosquitoes, the fact remains that there do exist some mosquito species that are good guys who help us, humans!

These mosquitoes actually turn conventional perceptions about mosquitoes on their head. Let’s look at one such mosquito species. For all those who think that mosquitos are tiny insects, the elephant mosquito will surely come as a big surprise. Toxorhynchites rutilus, as it is scientifically known, is the largest species of mosquito that inhabits the US.

The adult female of the species boasts of ½ inch wingspans and long legs too. With dark blue scales in metallic hues alternating with scales that are purple, green and silvery-white scales all over the body, they also figure among the most attractive mosquito species in the country.

The elephant mosquito is usually found in the south-eastern parts of the country. You’ll come across mosquito elephants west as far as Texas. If you’re shuddering at the prospect of getting bitten by such a giant mosquito, relax! 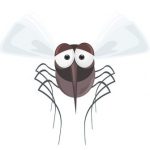 “Toxorhynchites rutilus, as it is scientifically known, is the largest species of mosquito that inhabits the U.S.”

Unlike its tiny cousins, the elephant mosquito is not a blood-thirsty insect that needs to feast on our blood to produce eggs. Since they don’t need blood to survive or lay eggs, they don’t bite animals or humans. So you don’t have to worry about getting bitten by these giant mosquitoes.

If they don’t drink blood, how do they survive is probably the next question on your mind. Like bees and other nectar imbibing insects, elephant mosquitoes too live on sugary substances like nectar from flowers and sap of plants.

These big mosquitoes use their long and trunk-like, downward-curved proboscis; these mosquitos suck nectar from within the depths of flowers. Incidentally, the shape and size of the proboscis have led to the name of elephant mosquito.

There’s more good news coming your way. Since these gentle giants are not thirsty for your blood and don’t bite, there’s no threat whatsoever of contracting infections or diseases usually associated with mosquitoes. So, vector-borne diseases are the least of your worries if you do come face to face with elephant mosquitoes.

The eggs are laid on water surfaces in places like rock pools, pitcher plants, tree holes, vehicle tires, flower pots and bird baths. Although the eggs are a bright-white, the larva is colorful – dark red on top and grey below.

In fact, different species of Toxorhynchites mosquitos have been tried out as biological control agents in the fight against mosquitos. However, these attempts have not been spectacular so far.

Not All Mosquito Species Are Harmful

As you can see, not all mosquito species are harmful. While it is still a long way to go before we can successfully use species like the elephant mosquito to tackle the mosquito menace in our surroundings, it is clear that the possibilities are ample.