What Humans Can Learn from Ants

Some of us might think that insects, like ants, aren’t as intelligent as other animals, like mammals for example, because of their tiny brains. This innate assumption about the limitations of their small brains seems to be pervasive, not only amidst laymen but also among scientists. 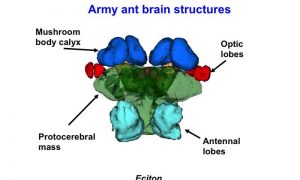 Ants are fascinating insects. So much so that one of the world’s leading biologists, Edward O. Wilson, devoted his career to studying them. The filed of studying ants is called myrmecology. Wilson reported the first colony of red imported fire ants in the United States back in 1942. Since then he has described approximately 450 new species of ants.

Biologists and entomologists typically tend to avoid searching and examining for human abilities in insects. However, the conventional perception that tells that the size of an animal’s brain necessarily correlates to the overall level of their intelligence has gradually shifted.

So how smart are ants? Do they have a language? Can they feel empathy? How do they navigate their way? These are some questions that arise around how an ant’s brain works. Experts estimate that ant brain consists of 250,000 neurons. That number pales in comparison to the human brain, which is believed to contain over 86 billion brain cells (although many neuroscience works of literature repeatedly stated 100 billion figure).

Compared to other insects some scientists believe that ants have the largest brain in proportion to its size. Even though ants don’t have emotions they do demonstrate intelligent behaviors. They can communicate, search for food, display courtship, avoid their enemies, and navigate over a long distance.

Even though ants don’t have convoluted emotions, such as anger, love, and empathy, they do demonstrate intelligent behaviors.

How Ants Navigate Their Way

Studies have shown that ants have a range of complex behaviors that are comparable to any mammal, especially when they navigate their way through a long distance beyond the nest to the food source. Ants utilize a variety of cues to navigate, such as light patterns, sun position, visual views, odors, ground textures, wind direction, hillside, and step-counting. These navigation cues that ants use are arguably more advanced than humans.

However, research has shown that ants do not combine all these cues into a unified cognitive map. Instead, they have four distinct strategies used in different navigational tasks:

With this strategy, ants keep track of distance and direction traveled during their foraging trips. This strategy is also called ‘bee-line’ home as it goes to how honeybees measure the distance they travel with their odometer, capturing image motion over their retina.

When traveling beyond their nests, ants recognize and navigate stereotypical routes by learning visual sceneries along their way. They follow the cluttered landscape containing plants, logs, branches and use the entire panoramic views to navigate around.

This strategy is used as a backup plan when ants are lost or when path integration and visual cues strategies fail to deliver them to their nest. They will do a Brownian walk strategy, or the mixture of random walks to find their nest position.

This method is used when they unexpectedly move from familiar to unfamiliar environments. They only use the backtracking strategy only if the ant has seen their nest’s surroundings before getting lost. 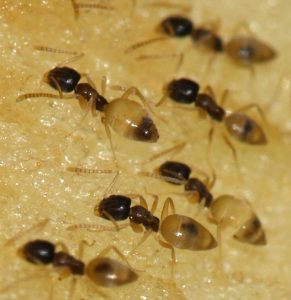 Studies have shown that ants have a range of complex behaviors that are comparable to any mammal, especially when they navigate their way through a long distance beyond the nest to the food source.

How Ants Protect Their Colony from an Outbreak of Disease

Not only ants can navigate their way from their nest to the food source. According to a recent study at the Institute of Science and Technology Austria and the University of Lausanne, ants are able to detect fungal diseases brought by the older ant workers (foragers). The foragers are the ones who collect food from outside their nest.

Once they detect the pathogen, ants will quickly change their behavior and organization in order to protect the most valuable individuals within their colony: the queen, brood, and young workers from becoming ill. The foragers, who are more exposed to the disease, interact more with other foragers. While the young workers (also called as ‘nurses’ because their duty is to look after the brood) connect more with other nurses and limit their interaction with the foragers. Its aim is to reduce the risk of spreading the disease to the entire colony.

Similarities Between Ants and Humans

Collectively, a colony of ants is a sort of super-organism with a hive-mind capable of impressive feats of architecture and other problem-solving abilities. Individual ant can be thought of as a neuron, with the colony representing a brain.

Ants are found all over the world and are one of the most successful types of insects regarding total population size. It’s been estimated that there are a million ants for every human on Earth. This triumph of ants is partly due to their extremely social nature. They communicate and cooperate extensively.

An ant colony is sometimes even considered a “super-organism.” This is due to the extent that it seems to act as a single unit. One ant may be your typical stupid bug, but thousands of them combine into a hive-mind that’s capable of solving fairly complicated problems. Much of this behavior seems to be coordinated through pheromones. 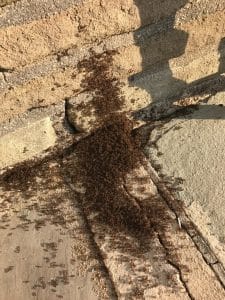 Like termites, ant society is segmented by a caste system that includes queens and workers. Unlike termites, male ants have wings and are called “drones.” Drones do nothing in life except fly around, eat, and mate.

Ants have long fascinated humans, holding a revered place in several ancient cultures. Some modern cultures in parts of Central America and Asia actually eat ants—a practice most of us would frown upon here in America.

But ants can also be a big problem if they get into your home or building (especially carpenter ants). There are more than a dozen different ant species in the Downstate area, and we know how to deal with all of them.

Like ants, it’s extremely difficult for us to survive on our own. We’ve always been a social species, living in groups and dividing labor between people working for the good of the whole community.

The main thing that’s allowed us to advance so much farther than other species is transmissible culture—the collection of knowledge, skills, and beliefs that can be passed down from one generation to the next, with the goal of helping people to survive and prosper as efficiently as possible. Although oral culture had flourished for millennia, it was the invention of writing that allowed transmissible culture to really take off.

All our incredible engineering projects and technology are only possible with many different people working together. Using ideas and derivatives of ideas that have been passed down from antiquity, modified and optimized with each new generation.

If you’re being bothered by ants or any other insects, contact Rest Easy Pest Control for our expert ant control services, so that you can rest easy!***