Cicadas are winged, oval-shaped insects known for the buzzing sounds they make, but there is so much more to them, and some interesting facts. 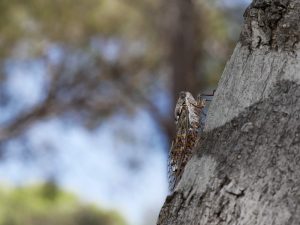 With more than 3000 different species of cicadas in existence, they range in color from brown to green to black. The average size of a cicada is around 2.2 to 5.5 cm long.

Some species appear every year during the summer season, while some come out only after several years, and are known as periodical cicadas. They have a long lifespan which ranges between 4 to 17 years, depending upon their species and lifecycle. Periodical cicadas have a longer lifespan as compared to annual cicadas.

Cicadas are known for their singing, and their violin shaped body structure aids them in producing the sound. Male cicadas sing by flexing their tymbals. These are drum-like body organs located in their abdomen.

The same way you would beat a drum, the muscles in their abdomen pull the tymbals in and out to produce the sound. From the inside of the abdomen are air-filled spaces which act as resonating chambers, and help in amplifying the sound they produce.

The sounds cicadas produce are actually their mating calls.  Each species has its distinct song, and the range can vary for each species.

Some produce a soft clicking sound, while others generate loud whirring or buzzing sound. The loud sounds which we hear are of male cicadas. Female cicadas are generally silent, and don’t produce any sound, while some can make the sound in response to the mating call by flicking their wings.

In certain species, males will fly from one spot to another if their call doesn’t attract females. Some will instead stay in the same spot, and repeatedly produce noises to call their female counterparts. Sometimes, when there is a lot of competition to attract females, some males will produce loud noises to cancel out their competitors’ calls. 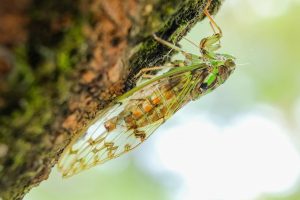 Cicadas are known for their singing, and their violin shaped body structure aids them in producing the sound.

Cicadas have the unique ability to turn themselves into evaporative coolers during extremely hot weather. Like humans, cicadas too can sweat, and they use this ability to survive extreme temperatures.

Their food source is largely made up of plant sap and liquids. So, as the temperature goes up, and their body starts heating, they start sweating by removing water from their blood, and passing it through body ducts. Pores in their thorax help in the evaporation of water, and the continuous evaporation provides them with the cooling effect.

This further helps them to stay active when it’s extremely hot outside, and to protect themselves from predators who would be hiding in shelters to avoid outside heat.

If you have ever tried to locate a cicada then you already know it’s not easy to catch them. They are extremely difficult to capture because of the loud sound they produce. This makes them hard to locate and narrow down the point where it’s coming from.

This trick aids them to distract predators. Even if you walk by a tree or twig with a cicada on it they will hide on the back side, and stop producing sound, so you won’t be able to find them that easily.

Cicadas are cold-blooded in nature, but they need to warm up to fly and sing. In order to do this, they make use of their dark-colored skin which absorbs the outside heat, they warm up, and this helps them to fly and sing.

If you have ever tried to locate a cicada then you already know it’s not easy to catch them. They are difficult to capture because of the loud sound they produce.

Cicadas have beautiful transparent wings which if you hold against a light source will transmit rainbow hues. The veins on the wings are symmetrical and together make a ‘W’ shape.

The sound some cicada species produce is so loud that it can be heard from a mile away. The sound of the loudest cicadas like Brevisana brevis and Megatibicen pronotalis walkeri can be recorded up to 106.7 decibels at a distance of 50 cm. Meanwhile, the Australian Double Drummer Cicada is known for producing deafening 120 decibels sounds.

The cicada females lay her eggs in the form of clusters that will strip the trees of excess branches. This is the same effect as pruning, which leads to healthier trees.

Although eating insects hasn’t exactly caught on for most of the United States, people who have tried cicada delicacies have enjoyed them quite a bit. They’re related to shrimp and lobsters, believe it or not, and some people — especially those in the Southwest — have been known to sautee them, dip them in chocolate, or even bake them into desserts.