It’s Tick Season! What You Need to Know About Ticks

Here’s What You Need to Know About the Bloodsuckers

Ticks can be harmful to both our canine friends and our household members. The black-legged or deer tick can carry Lyme disease, a bacterial infection that can affect the nervous system and joints. 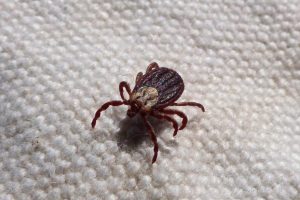 While some pests are simply annoying, there are several types of insects that can be quite dangerous to your family and pets, like ticks.

Ticks can be harmful to both our canine friends and our household members. The black-legged or deer tick can transmit Lyme disease, a bacterial infection that can affect the nervous system and joints.

Preventing them is very important to ensure the safety of everyone in your household. Here are some things to take note of:

When are ticks most active?

Although you can spot ticks on you or your pets any time of the year, they are most prevalent during May, June, and July when the pests are active the most in the United States.

US Centers for Disease Control and Prevention shows that people and domestic animals like pets such as dogs and cats are more vulnerable to tick bites as well as tick-borne diseases as compared to the other months.

People living in the Northeast, mid-Atlantic and upper Midwest should be more careful to avoid tick bites since those regions are where tick-borne diseases are most prevalent. 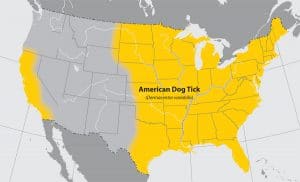 “People living in the Northeast, mid-Atlantic and upper Midwest should be more careful to avoid tick bites since those regions are where tick-borne diseases are most prevalent.”

A recent study at Rutgers University Center for Vector Biology showed that areas in North America such as Virginia and North Carolina on the east coast and northern California in the west coast are places where Asian longhorned ticks (Haemaphysalis longicornis) are prevalent. Other areas that are the most suitable for the tick habitats are northern Louisiana to Wisconsin, and on the west, it spreads into Kentucky, Tennessee, and Missouri.

In November 2018, CDC investigated the possible threat of the Asian longhorned ticks in several US states. They were discovered in New Jersey last year (the first invasive tick to arise in the US in 80 years) and now has been spreading to eight other states, including New York and Pennsylvania.  The tick species are known to have transmitted many types of diseases in other regions of East Asia like China. One of the unique things about this tick species is that its single female can reproduce offspring up to 2,000 eggs at a time without fertilization. So they’re basically clones of themselves.

How to make a homemade tick repellent

The smell and taste of vinegar and sulfur are great repellants of ticks. The pests will be repelled from an animal or person with either sulfur or vegetable/ almond oil. To make a homemade tick repellent for your pet:

To make a homemade tick repellent for yourself or loved ones:

Do ticks feed on anything other than blood?

No, ticks feed on blood exclusively. They suck blood from mammals, birds, reptiles as well as the amphibians. 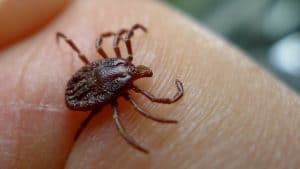 How long does a tick live without a host?

Ticks need blood to survive as well as for moving from one developmental stage to another. However, they sometimes lack hosts to feed on and can survive for extended for a long period without having a blood meal.

In some cases, some eventually die as a result of starvation. Some tick nymph species can survive up to 580 days without feeding while adults can live up to a maximum period of 730 days.

Can you feel if a tick is on you?

You may feel nothing at all when a tick is on you while another time you may feel a mild irritating sensation on the area from where the tick is sucking blood. If undetected, the tick will drop off on its own once it is full.

On the other hand, when you notice the bloodsucker as a result of irritating feeling, you are prompted to remove it immediately. However, it is advisable to avoid disturbing a tick on your skin unless you are removing it quickly since the disturbance encourages it to release saliva into your body and as a result, it might transmit pathogens which may make you fall sick afterward.

How to keep ticks out of your house

In many cases, the trick to gaining control of pests that enter your house is to keep them out in the first place. This is also true in the case of ticks. If you have pets, there are many products on the market — from powders and sprays to collars and shampoos that are designed to repel these dangerous parasites.

Of course, nothing is foolproof, so you’ll want to try a couple of different techniques. A good plan of action is to cut down on the hiding areas where ticks camp out until an unlucky person or pet happens to stroll by.

Also be sure to remove dead leaves and any clutter around your house, because ticks love to hide in these places. If your area is prone to ticks, you’ll also want to do regular inspections of your loved ones, both human and canine. 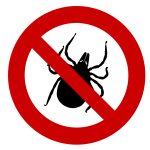 Don’t crush ticks with your hands (or burn it)!

Once you spot a tick on your body or animal, it is advisable that you remove and discard it immediately. However, you should not remove it with your bare hands and instead pull it from the host’s skin using a special tick remover tool or a pair of tweezers.

If you don’t have any of these tools, you can put on gloves and remove the tick using your covered hands. Once you manage to remove the tick safely, don’t crush it with your hands. Otherwise, you’ll be at risk of contracting the disease-causing pathogens that the pest might be carrying through its secretions.

Instead, flush the tick down your toilet, wrap it with tape and throw it away or put it in a jar full of alcohol/soapy water to kill it instantly.

In all likelihood, you’ve probably heard that the best way to get a tick to fall off is to burn it. Wrong! While it may be true that this is the most popular method, it is actually one of the worst. This is because the trauma from the burning may cause the tick to regurgitate some of the blood it’s ingested back into the host.

This can greatly increase exposure to disease and infection. The proper method doesn’t rely on burning anything. Simply grab a pair of tweezers and grip the head of the tick where it is attached to the skin.

Don’t get too excited and yank it off, as this could cause part of the mouth to remain behind, which is another way to increase the possibility of infection. Instead, pull the head firmly and steadily. After approximately 20-30 seconds, the tick will release its host.

Are ticks or other pests bothering you? Give us a call. We’ll quickly take care of them so you can rest easy.***