How to Avoid the Harmful Wasp Sting

How to Avoid the Deadly Wasp Sting 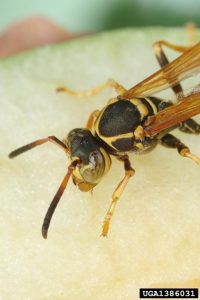 Wasps stings are no laughing matter. Lucie Roussel, the 51-year-old mayor of a Canadian suburb (La Prairie, Montreal), was killed by wasps. According to her friend’s report to Canadian newspaper Globe and Mail, Lucie was walking outside of her cottage when she accidentally stepped on a wasps’ nest and was stung 15 times (mostly in her legs).

Paramedics who arrived on the scene attempted to inject her with epinephrine, but to no avail—she was pronounced dead at a hospital nearby. Her death was particularly tragic: Roussel had just been elected to her third term as mayor, had an 18-year-old daughter and a 19-year-old son, and was described by a friend as “so full of life.”

Unlike bees, which die after they sting us, a single wasp can sting repeatedly. That’s why it’s more common for people to die from wasp stings than bee stings. Still, it’s fairly rare—it’s possible that Roussel had an allergy to wasps.

Wasps have two pairs of wings and aren’t hairy like bees. Wasps tend to be thinner, more brightly colored, and far more aggressive than bees. Also, while bee nests have the typical honeycomb appearance, wasp nests look like they’re made out of paper (and lack the honey).

But although they don’t serve the same vital pollinator function that bees do, wasps aren’t all bad—most insects that are pests to humans are preyed on by one or more wasp species. Wasps thus serve as a natural form of biocontrol and are being increasingly used as a form of agricultural pest control (as wasps have a little negative impact on our crops).

Facts About Hornets: The Dangerous Species of Wasps

Where You Can Find the Most Wasps

Spring brings all kinds of creepy crawlies out of the woodwork. Many of these, like cockroaches and crickets, will attempt to get inside your house. But what about those that don’t creep or crawl, and have little interest in visiting the inside of your home? Bees and wasps fall into this category, and although they may not act like other insects, it’s still important that you stay away from them.

There are a number of bees and wasps facts that you should be aware of. This is especially true if you’re allergic to their stings because being stung can cause you great harm, depending on your specific sensitivity level of bees and wasps.

We’re going to focus on where to be on the lookout for wasps, those nasty looking creatures with the big stingers, around NYC and Long Island.

New York City and Long Island are home to some of the state’s most beautiful parks. Take a stroll through any of them and you’ll see people running, children playing, pet owners walking their dogs, and a whole slew of other activities. Unfortunately, these parks can sometimes conceal a hidden danger — wasps. This isn’t a reason to avoid any of the city’s parks.

Being aware of the possibility is simply a precaution. When you’re having fun with your family or spending some alone time, be on the lookout. If you notice a collection of wasps or an actual nest, contact the Park’s Department.


“Unlike bees, which die after they sting us, a single wasp can sting repeatedly. That’s why it’s more common for people to die from wasp stings than bee stings.”

With the weather finally on the warm side, many NYC and Long Island residents are enjoying lunch and dinner outside at their favorite restaurant. What’s not to love? Breathing the fresh air. Enjoying the breeze. Much better than being stuck in a stuffy building while you eat.

With all that fine food outside, though, there’s the possibility that diners might end up attracting wasps. For the most part, you’ll probably only see a few of the critters. Just try to avoid them. No matter what you do, don’t antagonize them. They’ll typically leave on their own after a short period of time.

How to Avoid Wasps Sting

Wasps and bees aren’t just a nuisance — they can be downright scary. The fear of these flying insects is intensified if you happen to be allergic to their stings. But even if you’re not allergic, if these insects get close, you’ll quickly find yourself performing acrobatic stunts to stay away from them.

Many people try to avoid killing bees because they are necessary to our planet, but wasps don’t generally feel that kind of love from the general public. When things get out of hand, however, you might find yourself in need of a good wasp and bee killer as a way to regain the tranquility around your home.

For the most part, experts caution homeowners from using insecticides as a wasp and bee killer. The reason is simple: they don’t like it. You might get away with spraying a single wasp or bee, but spraying an entire nest can spell trouble. What you’re likely to do is upset them — especially certain species — and that’s just asking for trouble.

Plus, spraying insecticides willy-nilly around your backyard can be detrimental to some plants, not to mention possible exposure to pets or children. If you insist on spraying, be sure to exercise caution. 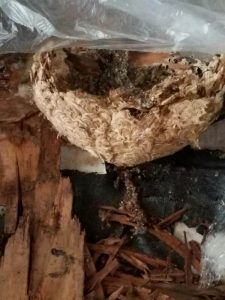 Having a nest of bees or wasps in your backyard is not only unsightly, but a large number of these flying sting machines that come in and out all day can be downright dangerous. However, it is very important that you do not attempt to destroy or remove a wasp nest yourself.

Doing so will upset the wasps or bees and you may be stung multiple times. If you’re dealing with bees, you should first contact a local beekeeper.

Often, these men and women will safely remove a hive and take possession of it. If you have wasps, or a beekeeper is unable to take the hive, contact your local pest control company to dispose of it for you or to advise you on your next step.

Setting Up a DIY Wasp Trap in Your Backyard

If you don’t have a full-blown nest to deal with, then you can create your own wasp and bee killer. All you need is an empty two-liter soda bottle, a stapler, and some sugary water.

Start off by cutting off the top — around 5 inches or so — of the bottle. Then flip it upside down so that it’s pointing down into the rest of the bottle.

Staple it securely to keep it from slipping, and then fill the container with a few inches of sugary water. The sugar will attract the bees and wasps, and once they hit the water, they’ll drown. 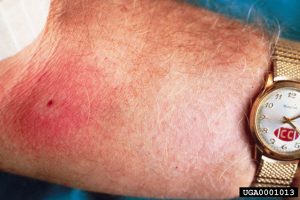 To prevent a sting, you should avoid provoking insects, avoid rapid, jerky movements around hives or nests and avoid perfumes and floral-patterned or dark clothing. Use insect repellent and wear protective clothing.

Use caution when eating outdoors as sweetened beverages or areas around garbage cans will often attract bees. For those who have a serious allergy to stings, carry emergency epinephrine and make sure friends and family know how to administer it in case of a reaction.

If you happen to get stung, you should remove the stinger if it’s still there by scraping it with a credit card across the stinger. Do not use tweezers! This can squeeze more venom into the sting site.

Wash the area thoroughly with soap and water. Apply ice wrapped in a cloth to the site for 10 minutes and off for 10 and repeat as needed. Apply an antihistamine cream or take orally if necessary and watch for signs of infection over the next few days.

The best thing to do is to remove a hive or nest as soon as it appears, so it doesn’t turn into a bigger problem. Doing regular inspections of your yard will help you notice them early. Bees and wasps like to build homes underground, under roof awnings and eaves, on hanging tree branches, fence posts, hollow tree trunks, and playsets.

For a problem with bees and wasps (or any other type of pest), give us a call so you can rest easy.***