Where Do Wasps Build Their Nest?

(And How To Remove A Wasps Nest)

They can be a real nuisance if they somehow build a wasps nest in or around your home. Due to their potential to sting and injure people, if you have kids or pets at home, then it’s better to keep the wasps away from your place. 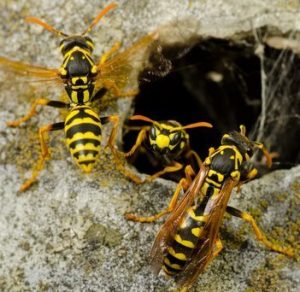 Spring and summer are pest seasons, and they are highly active in this season as compared to winter and summer. Among those pests who cherish this time of the year are wasps.

These insects belong to the order Hymenoptera and are neither ants nor bees yet possess properties from both of them. Wasps are invaluable for the ecosystem as they play a major role in natural pest control, and are ideal pollinators.

But despite their service for Mother Nature, they can be a real nuisance if they somehow build a wasps nest in or around your home. Due to their potential to sting and injure people, if you have kids or pets at home, then it’s better to keep the wasps away from your place. Hire a bee removal expert to make sure your problem is eliminated safely.

Where Do Wasps Build Their Nest?

Wasps build fantastic nests which can undoubtedly be categorized as structural masterpieces. Even though their size can vary with the species, generally wasp nests are greyish or straw colored. These nests are round in shape, mostly they resemble an umbrella which is attached with a single stalk to the nearby horizontal surface.

Wasps always build their nests in protected locations. They can build either ground or aerial nests.

Aerial nests are often seen hanging from the following:

But wasp nests are not limited to the outdoors or gardens; they can make their way into your home too.

In homes wasp nests are often found in the following places:

Wasps nests are not limited to these places; you can locate them in the most unexpected places in your home.

They can even build their nest in your house’s chimney, in the compost heap, in the hollow logs, wheel wells, and engine compartments of old, unused vehicles.

Basically, they prefer to build nests in the places which aren’t easily accessible and provide them shelter from outside conditions and predators.

Despite the fact that wasps are beneficial for nature, their presence is never a pleasant site. It’s better to get rid of their nests to avoid the allergic reaction or any painful interaction with them. Knowing some common wasp nest facts is beneficial when trying to remove one.

You can effectively remove wasps’ nests in the following ways:

Related Article: How to Know the Difference between Bees, Wasps, and Hornets

Removing a wasps nest is a tricky task; always keep on the protective gear, gloves, high boots and masks while dealing with them. And if you have an allergic reaction towards wasp stings then it’s better to take help from professional exterminators.***